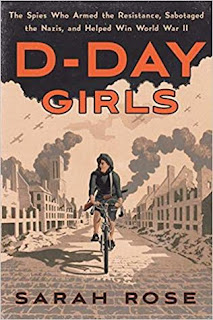 I remember my brother mentioning to me a year or two ago that he tries to make a point of reading historical nonfiction about the World Wars for Remembrance Day.  I thought that was a great idea, and so made a point of doing the same this year.  I picked out D-Day Girls: The Spies Who Armed the Resistance, Sabotaged the Nazis, and Helped Win World War II by Sarah Rose, which tells the story of some of the female spies recruited by Britain to help prepare France for the coming Allied Invasion (D-Day).

D-Day Girls mainly follows three women (as well as a few others), detailing what their lives were like, first in training, and then behind enemy lines.  The book also details the larger historical context, mainly showing the games the British agency (back in London) and the German anti-spy and terrorism agency were engaged in over the years.  I found this quite interesting, as I had no idea women were sent as saboteurs to France while the country was under Nazi control.  The book is also an interesting look at how women were treated at that time: first there was a debate about whether to send them at all (which was hindered by the fact that the women didn't do well in training, which also wasn't surprising as they received less training than their male counterparts), then there were points when men in the field refused to acknowledge their leadership (the particular instance I'm thinking of had the men, who refused to take orders from a woman, leaking information directly to the Nazis, putting everyone in danger), and finally, there was the aftermath where the women's contributions were deemed lesser than the men's even though they all did the same work (because the women weren't deemed military, and so were ineligible for military honours or full military pensions).  But it also celebrates some important firsts, such as the fact that some of these women were the first women paratroopers who dropped into enemy lines.

While interesting, D-Day Girls is unfortunately also a bit of a tough read.  For one thing, the book is largely told, with very little shown; that makes for some very tedious reading (and also made it very hard to connect with any of the people within the book).  It also goes into some detail on torture and the like; I had to stop reading after one torture description (and the ending of one of the ladies, while sparse in detail, was sufficiently disturbing that I actually considered not writing about the book because I didn't want to think about that anymore).

All in all, I am very glad to have read D-Day Girls, especially for Remembrance Day.

As a very random side note, this was the second time in the last month that my reading mentioned the female prison Ravensbruck (the first was in The Gown). If I'm ever feeling brave (as I suspect such a topic will be filled with atrocities), I'll have to read more about it.