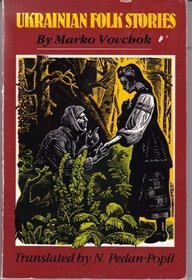 After reading (and getting depressed from) D-Day Girls, I decided I wanted something totally different. So I decided to give Ukrainian Folk Stories a try.  These stories were written by Marko Vovchuk in the mid 1800's, and translated into English by N. Pedan-Popil in 1983. Unfortunately, Pedan-Popil decided not to translate Vovchuk's stories for children and fables; what's left are the stories on serfdom and family live, which are overwhelmingly depressing!

Most of the stories are relatively short (the longest one, "Instytutka," was about 30 pages).  Many are about the hard life of Ukrainian serfs in the 1800's.  If they were lucky, they had a good master who rarely beat them; unfortunately the majority of these serfs had terrible masters, who beat them and verbally abused them.  There were a few stories about serfs who got their freedom, but even these often had terrible endings (I'm thinking of "The Slacker," where two women of Kozak lineage who shouldn't have been serfs get their freedom, but the daughter, who obtained their freedom, became a drunk in the process and passed away not long after becoming free; "Redemption" talked of the greed involved with masters, but thankfully has a happy ending, with a serf getting his freedom and being able to marry the Kozak woman he loved). Many of the other stories dealt with love, but often in terrible ways.  Take "Mismatched," where a woman's husband falls out of love with her, or "The Spell" (the only supernatural tale of the collection), where a woman who loves someone who does not love her back changes his betrothed into a bird so she can marry him instead (this story, which is pictured on the cover, in ways reminded me of Shadows of the Forgotten Ancestors, at least in terms of how the man marries someone he doesn't love because his true love is gone).

While depressing, these stories give an interesting look at life in 19th century Ukraine. I just wish the fables and children's stories had been translated, too (especially if they weren't as depressing as these tales were)!