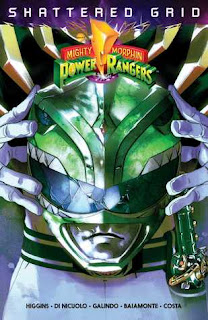 I played through Power Rangers: Battle for the Grid a few weeks ago.  I'm not a big fighting game fan, but I loved the story! It opens with an alternate universe Tommy Oliver (aka Lord Drakkon) having stayed with Rita Repulsa.  But he decides that she's holding him back, so he kills her and takes over; he then starts hunting through the Power Ranger multiverse for different sets of rangers to steal their morphers.  Well, when I was telling a friend about it, he mentioned that the game was probably adapted from the Shattered Grid storyline from the comics.  So I snagged a copy of it from Amazon, along with Beyond the Grid.

While the basic story-line remained the same, reading Shattered Grid after playing through Battle for the Grid was an interesting experience. For one thing, I felt like I was dropped in part way through the story; the Power Rangers had already fought and beaten Lord Drakkon once; along with the Ranger Slayer (Lord Drakkon's universe's Kimberley, who was brainwashed - she was freed from his control in the game as you play, but in the comics prior to Shattered Grid).

I also found that the big emotional moments kind of lost their oomph in the graphic novel.  I'm not entirely sure why that was - maybe because the game had voice over, so it was a totally different experience from reading the graphic novel, or maybe because I already knew they were coming.  Either way, I personally felt like some of the story was lost the second time through.

But in other ways, the graphic novel was a good read.  Some of the stuff at the end made a lot more sense than it did in the game (I honestly felt like this world's Tommy Oliver coming back from the dead was just thanks to *magic* in the game). And I felt like I got to know some of the other Rangers who were part of the story (I only really watched the original show, so in the game I had no idea who pretty much any of the Rangers were).  Also, Lord Drakkon actually wins for a bit. I didn't see that coming at all!

So while it was a different experience, I did still enjoy reading Shattered Grid. I'm looking forward to Beyond the Grid (and I'm going to have to figure out which graphic novel(s) introduce Lord Drakkon and the Ranger Slayer so I can see what exactly happened there, too!)