Interlude: Batman: A Death in the Family 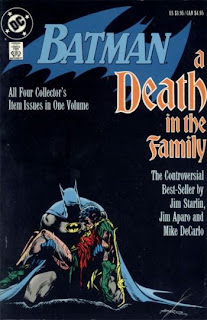 It's been a month or so since I've read any Batman graphic novels. So I was rather excited when a friend lent me Batman: A Death in the Family, which tells the story of the second Robin's death. I knew the second Robin had died, but I did not know how, other than that the Joker was responsible. I pictured the Joker shooting Jason, rather like he shot Barbara Gordon (but this shot would have been lethal). Other than that, I wasn't really sure what to expect; I don't really know anything about Jason Todd.
A Death in the Family opens with Jason disobeying an order from Batman and nearly getting killed. Batman decides to take Jason off of active duty; apparently Jason has not gotten over the death of his parents. While wandering around Gotham City, Jason encounters a friend of his parents who saved some stuff for him. He brings the box of stuff back home and discovers on his birth certificate that the woman he thought was his mother, Catherine Todd, was actually his step-mother. His real mother's name is blurred, but it begins with an "S" rather than a "C." Luckily his father's address book was also present, so he decides to track down the three women in there with a first name starting with "S."
Meanwhile, Batman has to decide whether to track down Jason, or stop the Joker's latest scheme (selling a cruise missile to Arab terrorists because he is broke). He regretfully chooses the latter, but luckily finds Jason along the way. Jason's quest had brought him to the Arab nations because that was where the three women were all working. So the duo track the Joker down, then continue to look for Jason's mother.
Lucky for Jason, the third time's the charm; the third woman turns out to be his real mother. They are briefly reunited, but then the Joker turns up, having some business with Jason's mother. Jason tracks the Joker down, then goes to warn Batman. Batman has to stop innocent people from dying of the Joker's laughing gas, so he warns Jason to wait for him. Jason doesn't. He goes in after the Joker to save his mother, but gets beaten practically to death. Then the Joker decides to dispose of the evidence, so he blows the place up, with both Jason and his mother in it!
It wasn't what I was expecting at all. Definitely not the best Batman story I've ever read, but it was pretty good to read. I know I gave away a good chunk of the plot in my summary, but I left a couple cool twists and turns out that are definitely worth checking out. Definitely a must-read for any and all Batman fans!
Posted by Shauna at 4:11 AM