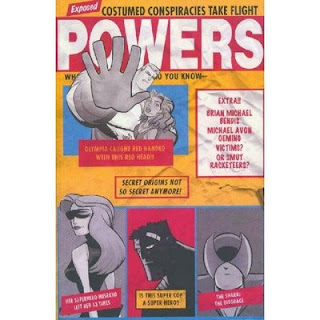 It took a little while, but the library listened to my suggestion; Powers: Little Deaths (volume 3) was added to the collection! (Along with volume 6, so the library now has the first 8 volumes of Powers!)
I have to say that I'm a bit disappointed with Little Deaths. It definitely wasn't as good as the first two. Little Deaths starts out with the death of another superhero, Olympia. The story then becomes magazine-like for awhile, before continuing with the story. It made sense for this to happen, but I didn't really like it.
So the Olympia story gets wrapped up, then Little Deaths gets into another one, where a graphic novel writer is tailing Walker. It was going along alright, but then the end just sort of happened; I know what it implies happened, but it just wasn't very good. After that, we're given yet another story that ends with the transcription of a court case.
All in all, I did not enjoy Little Deaths as much as I enjoyed the previous two volumes. Volume 3 just never felt like it had any closure. Deena didn't seem to play as much of a role in the stories, and we didn't really learn anything new about Walker. I'm hoping that the next few volumes will be better!
Posted by Shauna at 12:58 AM