School Book: Death of a Transvestite 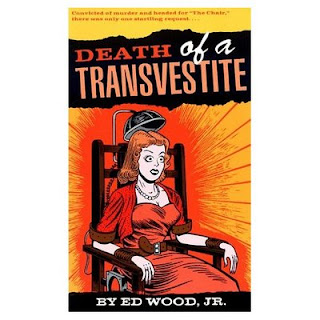 When I originally bought Ed Wood's Death of a Transvestite, I was assurred I would enjoy it. Everyone who had read it said it was a fun read. So I expected it to be good.
What I wasn't prepared for, but in hind sight should have been, was for this book to read like Ed Wood's movie Glen or Glenda but with a LOT more sex. It definitely didn't help that the main character was a transvestite named Glen as a man, and Glenda when he was in drag.
The book opens with Glen in jail, about to be executed via electric chair. He makes a deal with the warden to tell his story if the warden will let him die in the clothes he loves. As there is just enough time, the warden agrees. What follows is Glen's/Glenda's story of his/her life after leaving the crime Syndicate he/she worked for as a hired killer, and right before he/she got caught.
I was expecting some wild and crazy antics of a killer in drag. What I wasn't prepared for was the sex. Everytime you turned around, Glen/Glenda was either having sex with someone, or someone was reminiscing about the fantastic sex they had with Glen/Glenda. It felt like being in Ed Wood Fantasy Land, and it got a bit rediculous after awhile.
Death of a Transvestite wasn't a terrible read, all things considered. But you're probably better off without it. It was a bit hard to get into, and nothing really seemed to happen throughtout it. Ed Wood fans might enjoy it, but for the majority of people, I'd say pass this one by.
Posted by Shauna at 12:35 AM