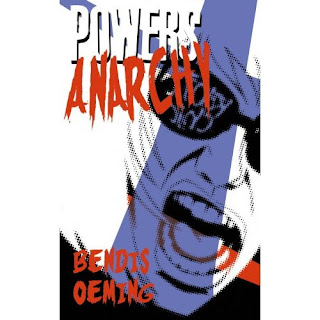 I just finished reading Powers: Anarchy and I have to say that it isn't the best volume in the series. It gets the job done, but cannot compare to Who Killed Retro Girl, Roleplay, or Supergroup.
Anarchy takes place about a year after Supergroup. Walker has been off the Police Force the entire time, due to events at the end of Supergroup. So it is up to Deena and her new partner to investigate the violent public execution of Omega Man, along with a string of related murders. All of these murders have the same slogan spraypainted on buildings around the fallen heroes: Kaotic Chic; this is the same slogan that was found by the body of Retro Girl.
After apprehending the lead suspect, they have to get Walker back; the lead suspect is refusing to talk to anyone but him. And amongst the already crazy events that have take place so far, there is only more insanity waiting within Anarchy.
Posted by Shauna at 12:18 AM