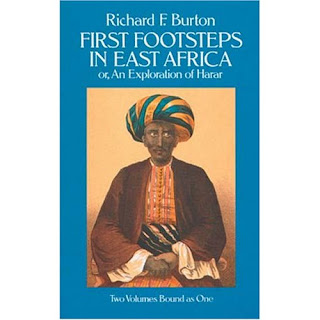 I decided to read Sir Richard Burton's book First Footsteps in East Africa after reading Laurence's The Prophet's Camel Bell. I am going to write an essay comparing the two books, as both Laurence and Burton's books involve Somaliland.
Burton is an extremely interesting character, so I was rather excited to read something that was actually written by him. I enthusiastically sat down to read First Footsteps...and was immediately disappointed by the introduction. But as that wasn't actually written by Burton, I clung to the hope that the actual stuff by Burton would be better.
In many respects I was mistaken. There are long chunks of the book that list off people's names, or the genealogies of different tribes. These were very hard to get through. But then there are other chunks that are super interesting, detailing his actual adventure. So parts of the book were very good, others not so much, at least according to my taste.
All in all though, I am glad that I read First Footsteps. By no means the best book I've ever read, it was nonetheless interesting. And I think it will work wonderfully in my essay!
Posted by Shauna at 10:14 PM