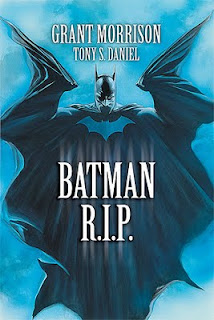 When I started reading Batman: R.I.P., I had a bit of trouble figuring out what was going on; it felt like I was starting in the middle of the story, with Batman going steady with some girl (and it took quite awhile before they even mentioned what her name was). But once I got over that, more and more I was reminded of Knightfall, Part 1. But unlike Knightfall, where Bane was physically trying to break Batman, coming after him while he was physically very weak, Batman R.I.P. was concerned with breaking Batman's mind.
In Batman R.I.P., The Club of Villains has targeted Batman. They have gone after Batman, targeting his friends and releasing the Joker, all in the name of gambling. Assurred by their host that the Bat will break, it is simply a matter of deciding how and when. But have they severely underestimated him? Or is the world's greatest detective's mind about to fracture into insanity forever?
While I didn't enjoy this as much as Knightfall, I felt like Batman R.I.P. was written in the same spirit. Both stories were concerned with breaking the Bat. And both were good reads. Knightfall was just a lot less confusing (and in my opinion just overall better).
Posted by Shauna at 9:49 PM