Ever World: Fear the Fantastic 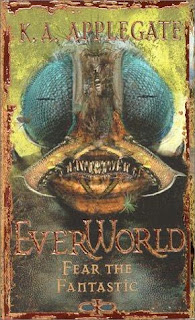 Well, here I am, half way through the Ever World series. This time around it's Christopher narrating. The gang had just escaped Fairy Land (well, left Fairy Land and will probably never be able to return after they brought Nidhoggr, who had destroyed parts of the Goblin Market). And then they stumbled into Hetwan country. Welcome to Ever World. The geography has been rather messed up from the get-go as they went from Viking lands to Aztec lands with only a day of travel. But now they're in the alien Hetwan lands, which is one of the last places they want to be.

Not long into their journey in enemy territory, they get caught and brought to join the revels of Dionysus, the Greek God of Wine. He's being brought to Ka Anor, the god of the Hetwan who eats other gods. After promising Christopher immortality, Christopher and the others agree to help Dionysus escape and return to Olympus. The only problem: Mount Olympus lies on the other side of the Hetwan lands. To get there, the group will have to pass right through the Hetwan's city, which is the stronghold of Ka Anor. And while they have a god on their side this time, Dionysus can't do much more than throw a party.

Yet again, Fear the Fantastic was a good read. I can't wait to start Gateway to the Gods, which is also the first Ever World book that I got from the library.
Posted by Shauna at 9:39 PM