Ever World: Brave the Betrayal 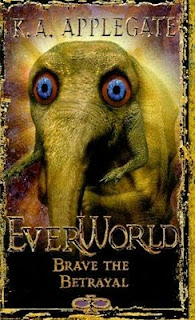 I have to admit that Brave the Betrayal was the weirdest Ever World book I have read. During a battle against the Hetwan, the gang heard a gun shot go off. Back in one of the earlier books they had traded a chemistry book to another alien race, the Coo-Hatch (pictured), in exchange for Coo-Hatch steel which can cut through anything (the Coo-Hatch outfitted their Swiss-Army knife with the steel, and the gang has jokingly called the blade Excalibur). While Excalibur gave them protection, the chemistry book gave the Coo-Hatch gun-powder. And now they are threatening to use the gun-powder against the Gods unless the Gods can send them home.
And so it falls to the gang to fix the mess they made. According to Senna, her mother is the only witch powerful enough to open a gateway to send the Coo-Hatch home. But her mother is in Egypt, serving Isis. So they must go find her and convince her to help.
The only problem is that Egypt lies through some "lands that are very strange," as Athena says. And indeed they are. After leaving Greece, the gang finds themselves in sub-Saharan Africa. They encounter Eshu, one of the Orisha, a messenger for the higher gods. He tells the gang repeatedly that they must make a sacrifice to the gods, but the gang refuses. April is Catholic and refuses to respect a false god. And Jalil (who is the narrator) is an athesist who refuses to change his belief because he is told to. Senna, who is with them, becomes livid that they refuse, and with good reason: all five of them get dragged into this weird upside-down world that is like an underworld of Ever World. And so they have to find a way back to the "real" Ever World. And all the while Jalil finds his refusal to make the sacrifice turning into a personal battle of wills with Eshu.
I have to admit, the only Gods that I sort of know that come from Africa are the ancient Egyptian gods. While I have heard of the Orisha before, I do not know what they are like. So I found this whole adventure to be extremely confusing.
But on the plus side, it had Vikings. The gang meets up with their old friend, Thorolf, the Viking they stayed with in Search for Senna.
Posted by Shauna at 2:07 AM