Ever World: Discover the Destroyer 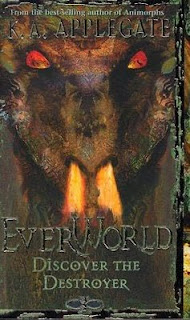 This time it's fairies. At the end of Realm of the Reaper, the group stumbled on Nidhoggr, the dragon who lives rather close to Hel's underworld domain. They have agreed to help him recover four treasures which were stolen from him by Leprechauns. But to ensure that they return with the treasures, he replaces their hearts with rubies (except Senna's. It's later revealed that her heart is too hard, and the dragon is too cheap to use a diamond); after six days the rubies will explode in liquid fire, killing them.

And so they find themselves in a Goblin-style Market with the very capitalist Fair Folk. After mentioning Nidhoggr, they then find themselves in the Fairy Castle. So everyone else can get away, Senna claims her half-sister April is the witch, which the Fair Folk and their resident Hetwan believe. But Jalil comes up with a very capitalist plan (introduce the Fair Folk to the telegraph) in an attempt to raise money to buy the treasures and free April. But in case that doesn't work, David heads back to Nidhoggr, having figured out how the dragon can fly in and simply get his stuff back (and April).
Discover the Destroyer had a very different feel from most of the other books (Realm of the Reaper in particular). It was a bit ludicrous, but all in all rather light-hearted and fun.
Posted by Shauna at 4:31 PM