Ever World: Search for Senna 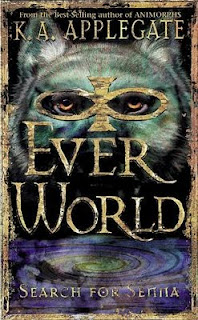 School is over, leaving me free to read whatever I want now. I was originally going to read something like Mogworld by Yahtzee Crowshaw, but in the end I decided to go with the first Ever World book. I apologize for the spoilers that will inevitable happen as I review all twelve books.

Ever World came out around the time when K.A. Applegate was also working on Animorphs. I was really into the Animorph books, so I was interested in reading something else by the same author. For reasons I don't remember anymore, I just never picked these books up at that time (probably because I was already into one indefinitely long series and didn't want to get into another one at the same time). So a year or two ago, I found the first six books for sale at a used book store. It was a really good deal, and I thought that might be all of them. Unfortunately, when I got home I realized that this was only the first six of twelve books. But with the help of the library and a local used-book store (the Bookshelf) for the 10th book which the library was missing, I was able to get a hold of all of them; I'm going to read them all one after the other (as long as I stay interested in them).

Search for Senna opened with a bunch of teenagers sort of fighting in a parking lot. I was intrigued with some of the stuff that was going on (it was a fight over a girl between two guys), but I wasn't sure that I cared enough to keep reading. But I soldiered on, and am extremely glad to have done so! Not long after the fight, this group of teenagers gets transported into Ever World when Fenrir, the wolf from Norse mythology, kidnaps Senna. The rest of the group finds themselves prisoners of Loki. They escape and find themselves in a viking village and later heading off to war. Meanwhile they have no idea where Senna is, and everytime they fall asleep they find themselves awake in the "real world."

After all of my viking reading late last year, how could I not be intrigued by this? I even knew more about some of the stuff that happened than the know-it-all smart kid Jalil (of course the giant snake is Loki's son - it's the world serpent!) I honestly think I'm enjoying Ever World more now (thanks to my readings of the Eddas) than I would have back then! Ever World is off to a great start and I hope it keeps my interest through all twelve books!
Posted by Shauna at 8:02 PM