Ever World: Realm of the Reaper 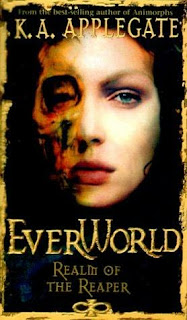 Realm of the Reaper. This time it's Jalil's turn to narrate. And this time the group heads straight back into Norse mythology. After wandering in the woods, they find themselves in "Her City," guarded by eunuchs. The eunuchs keep everyone (almost entirely good looking men) inside of the city so they cannot escape her. The "her" everyone is talking about is Loki's daughter, Hel, goddess of the underworld, half beautiful woman and half corpse (also pictured on the cover). It seems she has her way with her chosen man/men and then submits them to eternal torments in the underworld. And this time around it's Jalil, David and Christopher she wants because they're from the "Real World."

Realm of the Reaper was also a great learning point. It gives some insight into exactly why Jalil is present. Where April is her half-sister, Christopher her ex and David her current boyfriend, Jalil didn't really fit with them. But Senna specifically chose him to be there. And for all of his outward appearances, in the "Real World" he fights OCD.

In a series that can be rather creepy and gruesome, Realm of the Reaper was probably the creepiest. But it was still a really good read. Now I can't wait for Discover the Destroyer (which is once again narrated by David).
Posted by Shauna at 11:37 PM