Ever World: Enter the Enchanted 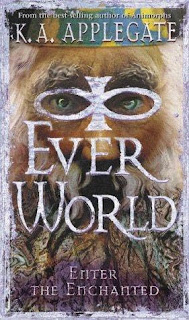 I guess I'm still quite interested in Ever World as I just powered through book 3! This time around it was April, Senna's half-sister, who was narrating. And they had a run-in with Merlin and some of the knights of the round table (Galahad, Gawain, Perceval, Gareth and Kay in particular). In the spirit of Sarah Zettel's Camelot series, I found Enter the Enchanted to be quite a good read, especially since it gave a new look at many of the people I enjoyed from Zettel's series.

This time around, the gang has found Senna. But they are attacked by a dragon, which is sent off by Sir Galahad. They find themselves the guests of the knight at one of his castles. Unfortunately, they are not the only guests as Loki has also shown up, demanding Senna.

Enter the Enchanted had a lot more adventure than Land of Loss. Rather than wandering around lost, this time around the gang seemed to make more decisions for themselves. And while my favourite narrator is still David, April was a lot better than Christopher. So I guess that means Jalil will be next in Realm of the Reaper.
Posted by Shauna at 1:06 AM