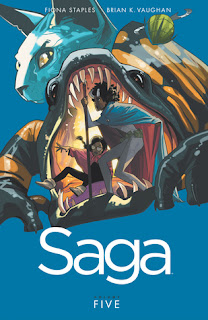 Well crap.  This is it.  The last Collected Edition of Saga.  Saga: Volume 5 ends with Chapter 33.  According to the Image Comics website, Saga #32 is coming out next week.  So even if I rush out tomorrow to get the comics, I can only get one more right now.

Anyway, I'm getting a little bit ahead of myself.  Volume 5 takes place a few months after Volume 4.  Marko and Robot Prince IV have been chasing after their families but haven't yet been successful.  Meanwhile, Dengo, the Robot janitor, has contacted the Last Revolution, a group of rebels who want to end the war.  Of course, the Last Revolution aren't good guys: they've blown up daycare centers and decapitated thousands of innocent civilians.  Alana and Klara (Marko's mother) try to warn him (while simultaneously trying to escape) but he insists on talking to the resistance.  Of course, as soon as they open their mouths, Dengo realizes Alana and Klara were right.


Meanwhile Marko gets high thanks to Yuma (Heist's ex wife), which puts his whole expedition at risk when Robot Prince IV is forced to call a doctor to help.  And Gwendolyn, Sophie, Lying Cat, and The Brand (The Will's Sister) have fun adventures trying to get the magical ingredient they need to save The Will: dragon semen.

Things all come to a head when the Last Revolution makes a deal to exchange Hazel for hundreds of their people who are imprisoned.  Unfortunately the government they make this deal with is not the ally of the Robot people; they demand Dengo's death before a deal can be made.  Dengo and Klara manage to get away but are split up.  Klara (with Hazel) attempts to free Alana but is recaptured in the process.  Dengo and Alana escape the ship thinking Klara and Hazel were already off it.  The ship jumps away, separating Alana from the rest of her family.  But luckily Marko has made it to the planet, so she is reunited with him.  Unfortunately for Dengo, Robot Prince IV is there too.  He is reunited with his son.


So yeah, that's where Volume 5 leaves off.  So much has happened.  And there's still so much going on!  I want more like right now!  Unfortunately I'm going to have to wait though. :(

On a super awesome note, thanks to my Saga reading marathon, I have caught up with my Goodreads reading challenge!  At the beginning of the year my plan was to read 50 books off the List.  But that didn't happen (and honestly, not a whole lot of reading has been happening this year), so I decided to count all the books I've read this year, bringing me up from 24 List books to 48 total books (including all five Saga volumes).  I kind of feel like I cheated a bit, using graphic novels to inflate the numbers a bit, but realistically I've only got two weeks left to hit 50 books and I wouldn't have been able to do it without them.  I'm not quite sure what I'm going to read for the remaining two books yet, but at least I'm now on track!
Posted by Shauna at 3:15 AM

So I was looking at the stats on my blog vs the amount of books I've actually read this year. Apparently I didn't mark The Fairly Stillwart Chronicles, Volume 2 down (because it wasn't on Goodreads at the time). So I've actually read 49 books (or 53 if you break down Volume 2 into all three books and The Book of Jhereg into all three books as well).